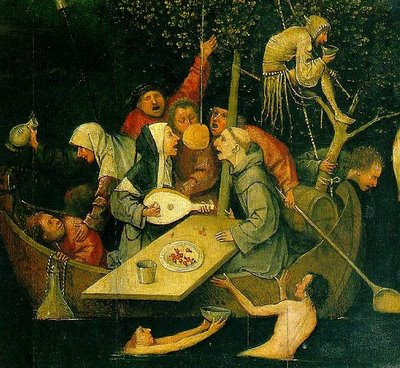 The fool says in his heart, "There is no God."

Ok that’s the pew Bible. Now listen to Psalm 14 translated
in The Message.

‘Bilious and bloated, they gas, "God is gone."

Their words are poison gas, fouling the air;
they poison rivers and skies; thistles are their cash crop.

God sticks his head out of heaven. He looks around.
He's looking for someone not foolish—just one
God expectant man, even one God-ready woman.

And He comes up empty. A string of noughts. Useless, unshepherded sheep, taking turns…pretending to be the Shepherd. The ninety and nine… follow their fellow.

Don't they know anything, all these impostors?
Don't they know they can't get away with this—
Treating people…treating creation…like a fast-food meal
over which they're too busy to pray?

Night’s coming for them, and nightmares,
for God takes the side of victims.
Do you think you can mess with the dreams of the poor?
You can't, because God makes their dreams come true.’

You know I think this psalm… may really be…David’s own poetry. Well his wife Abigail used to be married to an idiot named Nabal

נבל which is the Hebrew word…used in this Psalm… as a euphemism for ‘fool’. That’s right…one of David’s wives had been married to a guy named ‘fool’

You see according to the story in the book of Samuel…back in the day when David was young and feisty… and not yet king…he and his men were outlaws…living rough off the land… in the Wilderness ofParan…they survived by protecting the shepherds who worked for this guy Nabal…aka fool…and Nabal was a very wealthy landowner.

It was coming round to shearing time and David’s boys wanted to enjoy the festivities along with everyone else …but it was hard going… just surviving day to day. They were always hungry…so David sent ten of his boys to negotiate with Nabal for provisions… giving strict instructions how to ask him…

David said ‘now I want you to greet Nabal in my name, and say 'Shalom! Life and peace to you. Peace to your household, peace to everyone here! When your shepherds were camped near us…we didn't take advantage of them. And they didn't lose a thing the whole time they were with us. Just ask them.

What I…David…am asking…is that you be generous with my men—share the feast! Give whatever your heart tells you…to your servants and to me…

Now when David’s boys deliver this message word for word… Nabal tears a strip of them…"Who’s the heck is this David? This son of Jesse? The country’s full of runaway servants. Do you think I'm gonna take good bread and wine… freshly butchered meat for my shearers…and give it to men I've never laid eyes on? Who knows where they really come from?"

Well to cut a long story short…David took the insult personally. In a rage he got ready to rampage right into Nabal’s farm. When one of the shepherds saw this…

he headed straight to Nabal’s wife…Abigail…and told her how her husband refused to feed the outlaws and insulted David.

When the two meet up…Abigail falls to the ground at David’s feet…and pleads with him to accept the supplies she brought…she even offers to take the blame onto herself for her husband’s sin.

And while she’s at it Abigail swears Yahweh will ensure David’s dynasty… lasts a thousand of years… and that David will be sinless and divinely protected…and in that case… he wouldn’t want unnecessary bloodshed on his conscience… would he? [pause]

As a result of Abigail’s words of wisdom…David realises he’s about to commit a foolish and grave sin himself…
so he calls off the attack and sends Abigail home in peace.

The story ends when Abigail arrives home next day… to finds her husband drunk and merry…after over indulging at a banquet. When she finally tells Nabal what she’s been up to…he has a heart attack… and dies ten days later. David interprets Nabal’s death as divine punishment … and asks Abigail to marry him…and she accepts.

since Abigail’s husband is drunk at the end of the story… this makes a lot of sense. Plays on words and puns like these…were an art form for the Hebrew storyteller.

But ultimately the name Nabal… becomes famous for this shamelessly rude…corrupt and selfish person… Nabal comes to mean … fool. And possibly… our Psalm was written right after Abigail’s husband dies ‘cause he sure fit the definition of fool.

When David’s hungry men ask Nabal to share his considerable wealth…to be generous with them…he covers up his own selfishness…by condemning and abusing the very ones who come to him for relief.

Nabal assumes what he has…belongs to him alone…to do with whatever he wants.

And because the fool makes his own rules…he feels absolutely no responsibility to other people particularly and especially… the outcast the hungry and the poor. Nabal has made himself God…and lord of his universe. He lives by his own rules and our psalmist warns:

They are corrupt, their deeds are vile. The psalmist says God can’t find anyone who hasn’t turned aside from his way of Shalom…where the goal is the welfare of all people. And God…who is the refuge of the poor…discovers they’re being devoured like bread.

as the proverb says… know nothing of wisdom.

And in scripture it’s not just individuals who are fools…the same word ‘nabal’ is applied also to the nations. Since wisdom is the gift of God expressed in the law and the prophets…to be without it…

even worse to ignore it…is to be foolish.

In Deuteronomy we read…

Is this the way you repay the LORD, O foolish and unwise nation? Is he not your Father, your Creator, who made you and formed you?

Take to heart all the words I’ve solemnly declared to you … They aren’t just idle words…they are your life. By them you will live long in the land.

Jesus…the one sent to save us from ourselves and reveal God to us… warns us that to call someone else a ‘fool’ places us right on the precipice of hell. That’s Matt 5:22 if you don’t believe me. We’re warned because our arrogance and pride may have blinded us to our own selfish folly… and blinded…we could stumble.

Of course the gist of Jesus’ wisdom…
is what looks like folly to the world…may in fact be…
the way of salvation for the world. You see from the worlds perspective…the little boy in the story of the loaves and fishes is a fool for sharing his food…and it’s no coincidence the story of Jesus feeding the five thousand is the Gospel story set down for today.

the work of God…reconciling all creation to himself...

"They eat up my people as they eat bread." [pause]

Did you know there’s a very popular website…
where atheists can get together to swap yarns and share religious jokes…they’ve named the site intentionally and ironically: ‘Ship of Fools’.

And yes… we can smirk and feel smug…

until we remember with dread…Jesus’ warning that perhaps we ourselves are blind fools…guilty of living by our own rules…making ourselves God and saying in our hearts…
‘there is no God.’

Perhaps the lesson of ‘the Fall’… is that we’re all from time to time…passengers on that little boat…
as it sails across a godless and complacent sea.

And because our culture says in its heart…‘there is no God’
there’s little motivation to examine the values that govern our choices…our relationships…our politics and our lives. In this era of post-Christendom…our ethics can be created and discarded… by each individual as they see fit. [pause]

One: examine our hearts…and confess there is a God
Two: remind ourselves and our community…
the standards we try to live up to…are the values of the Sermon on the Mount…the life saving ethic of Shalom…of peace with justice compassion and mercy.