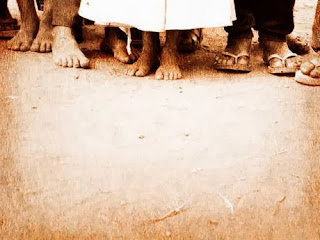 A wise man named Michael Hardin wrote recently…
We must begin with Jesus, the full and final revelation of God …
as the early Christians did…
or we will not end with Him.

This month were beginning a series… on Jesus as the focus of Christian life. We’ll be looking at four things:
How Jesus understood
1. his Bible
2. his relationship with God
3. holiness vs mercy and how he understood
4. the meaning of discipleship

And I warn you… there’s a high risk of re-conversion
if you take Jesus as seriously as this series will suggest.
But we must begin with him…or we will not end with him.

Why is this important? Well…two reasons…
some highly spiritual people… would like to negotiate Jesus right out of Christianity. For them all divinity rests in a spiritual being beyond the human dimension – maybe sustaining all creation… maybe quite apart from it.

To these people…all the stuff that’s written about Jesus in the Gospels is a little embarrassing…they say the Gospels aren’t trustworthy…that Jesus can’t be known…they say the early church invented a lot of what Jesus says… in the Gospels….
but today we know… from insights gained in the modern sciences of astronomy and archaeology…
the Gospels are quite accurate historically. [adlib re sermons?]
The second way people want to negotiate Jesus out of their faith is much more subtle…many who call themselves Christian …somehow believe the whole entire Bible…has equal divine status to Jesus. They hold what’s called a ‘flat view’ of scripture…
where Jesus is displaced as the interpretive centre of the Bible.
Today I’m going to make the radical suggestion that...
if Jesus really is to be the focus of our Christian life…
we must begin with him in everything we do and everything we say……. about the Bible…about God, and what it means to be a disciple of Yeshua of Nazareth…whose mother was Mariam…
the Jesus who came with a defined mission and message.

Superstar slide
We must begin with the Jesus of the gospels…because that Jesus has been papered over and painted over so much…
that 2000 years later…it’s hard to recognise him.
Yet in spite of any attempts to dispense with Jesus…it’s clear
that some have known him…and modelled their lives…on his.

Feet slide
Another reason we need to make Jesus the central focus of Christian life… is that today…Christianity is having an identity crises. Young people especially… are revolting against a church which fails to demonstrate discipleship
in any meaningful way relating to Jesus.

Communities are springing up around the world… seeking to follow Jesus… in what they see as an authentic and radical way – it’s like they’re seeing Jesus… in a new and vital and refreshing way. The Jesus they talk about
sounds like a real person… who lived a real life.

While most of us accept Jesus’ Jewishness and know the earliest Christians were almost all Jewish…but we take for granted that the early Roman Church chose to include… the story of the Jewish people in what we now call the Bible.
They did it to make two important points…one that they worshipped the same God and…as the author of the letter
to the Hebrews says…in our New Testament

Slide words
‘In the past God spoke to our ancestors through the prophets
at many times and in diverse ways, but in these last days
God has spoken to us by his Son.’

Notice the explicit contrast the writer makes…between the way God spoke in the past and the way God has spoken in Jesus? The Gospel of John… also makes this distinction.

Blank slide
In the verses we heard today…John contrasts…the grace and truth that have come through Jesus… with the ‘instruction’… … that came through Moses.

In the same way…the apostle Paul contrasts
the covenant revealed in the Old Testament with the new covenant inaugurated in Jesus.

Not one of these Christian writers assumes the Jewish scriptures put together in 70AD were perfect…
instead they maintain that in Jesus…
something new has occurred.
Something that demanded a re-evaluation…of how they interpret the scriptures… and how they view God.

Road to Emmaus
Just remember… how incognito…the risen Jesus walks along the road…doing Bible study with two Jewish men…
first he asks them what they’re talking about….
Jesus of Nazareth,” they reply. “He was a prophet, powerful in word and deed before God and all the people.
The chief priests and our rulers handed him over to be sentenced to death, and crucified him; but we hoped he was the one who was going to redeem Israel.

Have you ever noticed where the resurrected Jesus starts!
He turns their attention to the problem of suffering and violence. He tells them the violence done to an innocent victim…is the key for interpreting the scriptures.

How foolish you are…Jesus says…and how slow to believe all the prophets have spoken! Didn’t the Messiah have to suffer these things and then enter his glory?

Text slide
And beginning with Moses and all the Prophets, Jesus explains
to them what was said in all the Scriptures concerning himself.
Jesus explains how to read and interpret the scriptures …which they’d all memorised from childhood. Jesus asks them a question about suffering…to help them understand
the meaning of his suffering and death.
But wait a minute…

blank slide
up to that moment… their theology…their understanding of God …their assumptions about God…would predict a violent vengeful response on God’s part…following the death of God’s beloved Son. But the forgiveness expressed by God in the resurrected Christ…
collapses their previous ideas about God…

Feet slide
And we read in the book of Acts…by virtue of their encounter with the risen Christ…the earliest Christians insist in their preaching…that filled with the fullness of God…
Jesus forgives our sin.

where the violence done by humans… to the innocent Jesus
is met with forgiveness.

his life death his resurrection and ascension…
were the beginning, the middle and the end of all they thought and taught………..because…they…had… known him…

Jesus is central. And so in this new year of 2014…as we celebrate the 200th anniversary of the Gospel in this land…
the Jesus of the gospels must always be our starting point.

Why?...Because it’s a whole lot easier to follow a generic god…with a small g…
onto which we can project whatever we want God to be like!

It’s much harder to follow Jesus…because then you have to take seriously…his teaching about what it means
to follow him. Because Christian theology…Christian understanding and talking about God…starts with a particular person…Jesus of Nazareth…not with the general.
A major flaw with a lot of God talk…is it begins with abstract ideas… rather than the specific….final…
authoritative revelation…of God’s character in Jesus.

In fact I suggest you beware of anyone today who urges you to think about God in the abstract. The Bible certainly doesn’t!

The Bible begins with a specific God…creator of all that is.
This specific God is revealed in how God acts…most notably in the act of incarnation…in the life, death, resurrection and ascension of Jesus.

And if our starting point for interpreting the bible is forgiveness from Cross rather than retaliation…
how can we reconcile the violence of God we read about in the Old Testament… with this non-violence of Jesus?

The problem arises… because Christian’s often refer to both Jesus and the Bible as the word of God. What can happen is that people think just as Jesus is sinless…so the whole Bible
is free from human mistakes in understanding.

But when we do this… we act as though the words themselves are sacred…rather than God of which they speak…the living God… who can breathe meaning through the words of scripture to each one of us.

to see the entire written word as equal to Jesus…
rather than in relation to him...seems to me…to be idolatrous.

Jesus and Pharisees slide
The fact is…struggles over interpretation of Scripture go back way before Jesus. It’s well known the Jews debated amongst themselves what might be the key commandments to keep –
and the right way to interpret or fulfil the scriptures.

And this was happening when Mark tells us when a teachers of the law heard them debating he was impressed with Jesus answer. And so he asks Jesus ‘Of all the commandments, which do you think is the most important?’

And Jesus says…the most important is this…‘Hear, O Israel: slide words
The Lord our God, the Lord is one. Love the Lord your God with all your heart…all your soul…all your mind…all your strength.’ The second is: ‘Love your neighbour as yourself.’ There is no commandment greater than these.”

Blank slide
You’re right says the man… more important than all burnt offerings and sacrifices. And here Jesus tells him

Slide words
‘You’re not far from the kingdom of God.’

Jesus perspective on the scriptures is profoundly important for us… beginning with the confession that ‘God is one’…
God isn’t a mixture of yin and yang, good and evil, terror and love. God is consistent.

Maybe other gods are mixed up, but Jesus’ God…the one Jesus calls Abba…the One who made heaven and the earth… the one we’re called to love…is… and always will be…
one.
Only two-faced gods needs to be feared. If Jesus is God’s wisdom incarnate… and Jesus says don’t be afraid…the greatest commandment is not to fear the Lord…
but to love the Lord...

For Jesus… love of God is more than just keeping the Law
love trumps everything…including sacrifice and an eye for an eye. For Jesus…love of God is active… and expressed in a radical new way…yes love your neighbour…but love them even when they’re your enemy…
for as Paul discovered… ‘perfect love… casts out fear’.

Earth slide
At stake in Jesus’ debate about the greatest commandment
is how you and I are to interpret the Scriptures of the Old and the New Testament...at stake is how we live out
that interpretation in the world today.

You see in this era of global awareness…our neighbour includes all seven plus billion people on the planet. Loving God as Jesus defines it…means actively making sure everyone is cared for…actively forgiving those who sin against us… actively making peace and reconciling with others.

Jesus slide
If we begin our interpretation from our own viewpoint and not from the cross…it’s easy to lose sight how distinctive Jesus’ perspective actually is. And if the Jesus of the gospels is to be your primary interpreter for understanding the bible…then how can any behaviour that doesn’t look or sound like the Jesus of the Gospels…be Christian behaviour.

The time has come for us to stop relating to false and graven images … and begin relating to the Jesus of the Gospels.
Then we will know how to truly love God and our neighbour and all those… with whom we need to be reconciled.

The bottom line is this…you and I live out in our everyday relationships…what we believe about God.

We must begin with Jesus,
the full and final revelation of God…
as the early Christians did…
or we will not end with Him.


My thanks to Michael Hardin - author of The Jesus driven life for his inspiration for this sermon.
Posted by Diane Gilliam-Weeks at 1/05/2014 11:30:00 am

Email ThisBlogThis!Share to TwitterShare to FacebookShare to Pinterest
Labels: interpreting scripture from the perspective of the Cross., Jesus as central in biblical interpretation, Jesus focus of Christian life
Newer Post Older Post Home