The unclean of Darfur 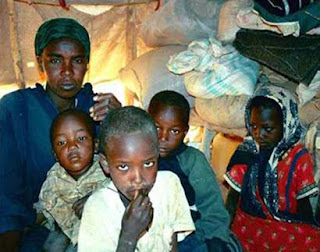 Easter 5 year C Sermon 07 Darfur
They will be his people, and God himself will be with them and be their God. He will wipe every tear from their eyes. There will be no more death or mourning or crying or pain, for the old order of things has passed away."

"I am making everything new!" "Write this down, for these words are trustworthy and true." "It is done. I am the Alpha and the Omega, the Beginning and the End. To the one who is thirsty I will give to drink without cost… freely from the spring of the water of life.

And in Peter’s vision we heard the voice from heaven saying:
'Do not call anything unclean that God has made clean.'

After Jesus departure… the ongoing companionship of the Holy Spirit… gave visions to those left behind… to continue Jesus’ work… of reconciling all creation to God. And I’m convinced… the Spirit is still encouraging visions today.

Visions of what could be…visions hope and justice…and visions that expose… the diabolical notion… that some
are righteous and deserving of life… and others unclean… deserving the confiscation of land, poverty illness and even death. Expendable.

This diabolical lie… rears its ugly head throughout history. Justifying wars, colonialism… even ethnic cleansing and genocide.
Christian’s are not exempt from this temptation.
And this diabolical notion… can deafen us to God’s call…
and blind us to the atrocities committed in its name.

In Nazi Germany… hundreds of thousands of worshipping Christians… became blind and deaf… to the systematic murder of millions of human beings. They went to church and sang their praises and prayed their prayers… and the furnaces burned with the bodies of men women and children.

And today…the world acknowledges… the shamefully inadequate international response… to the genocide in Kosovo, Cambodia and Rwanda.

And it’s happing again… in Darfur in the Sudan. And I could never forgive myself…if I didn’t open your eyes and ears to it.

Here at the Iridimi refugee camp in Chad…we Hawa Salihdin and her children waiting for help. Her father, her brother, her cousin and thirty other people… were killed when the militias attacked her village. Her mother disappeared and is still missing.

Here we see a malnourished girl…in the MSF therapeutic feeding center in Iriba, Chad. In spite of international assistance nutrition continues to be a problem for refugees from the violence in Darfur. The situation is worse inside Sudan, where the government obstructs access for relief agencies.

The Sudan has been on my heart for 14 years. From the time I met my first Sudanese pastor at a meeting of the World Alliance of Reformed Churches in Wellington. This kind soft spoken man was very very black… and underneath the skin of his forehead… tiny beads had been embedded… to make a beautiful design. He told me then… that death was raining down on his people.

I am determined that we will not be deaf and blind in this church.

Yes there’s a growing movement… to end the crimes against humanity in Darfur…and to prevent future Darfurs from unfolding. But I’m not trying… to get you out into the streets in protest… though you might want to. Success for the people of Darfur won’t be measured by the number of rallies… the size of the crowds, or the media coverage. Success can only be measured… in lives saved…rapes prevented…
communities preserved and rebuilt.

And I’m not trying to get you to give more money to aid agencies trying to relieve the suffering in Darfur. Though you may want to. That’s not my purpose either.

Yes of course we can pray… and we can support humanitarian aid to the region…but what if I were to tell you…that in our deafness and blindness… we might be giving with one hand and taking away with another?

What on earth am I talking about? Well, in the documentary we just saw… how many of you noticed a brief reference…
to the wealth of oil reserves… which lie deep beneath the ground in the Sudan?

Ever wonder why the United Nations is so toothless in acting to stop the carnage in Darfur? Well, one of the main reasons is…
two of its permanent Security Council members…
Russia and China…refuse to vote in favour of confronting the oppressive government of the Sudan.

Both Russia and China… have major oil investments in Sudan: Russia’s oil company is Tatneft, and China has Sinopec and PetroChina.

Human Rights Watch… Africa Division…condemns China’s disregard for the Darfuris… in pursuing its own economic agenda: In response to domestic and international pressure…when the Canadians withdrew their oil company from Sudan… the Chinese took their place. And to make sure the Sudanese are able to protect Chinese refineries… China supplies ammunition, tanks, helicopters, fighter aircraft, and antipersonnel landmines to the Sudanese government.

And what is more frightening is that seventy to eighty percent of Sudan’s oil revenues are used to support their military… which not only protects the refineries… but supplies weapons to the Janjaweed. The managers of security operations for the oilfields and pipelines… have the power to grant or withhold healthcare, education and freshwater.

Local people are force off refinery land… by the Sudanese military…with tacit approval of PetroChina.

And there is a diabolical catch 22 here. The UN can’t send peacekeeping forces to the Sudan… without the agreement of China and Russia on the Security Council.

I guess it’s something to be proud of that at least New Zealand contributes to Africa Union peacekeepers in the Sudan…But the truth is… humanitarian aid and peacekeeping on their own won’t end the genocide.

Remember when I said we might be giving with one hand and taking away with another. Well what if we were to discover that our own investments… for retirement or income… were complicit…in the displacement rape and slaughter in Darfur?

PetroChina, lists on the Hong Kong and New York Stock Exchanges. The Chinese company CNPC which drills in the Sudan is completely reliant on PetroChina for its financial health. And some of the larger shareholders in PetroChina, are
Warren Buffets’ Berkshire Hathaway, Fidelity Investments, JP Morgan, and Templeton.

These companies have a particularly important role to play… and an enormous ability to influence how PetroChina is viewed in financial markets.

If our money is in these companies… then we have a good deal of persuasive financial power… at our disposal. We can engage the companies we support… to use their power…
to pressure PetroChina…. to stop funding the Sudanese government and take the Janjaweed off life support. Such pressure could lead to a dramatic reduction in violence,
and save many lives in Darfur.

And if these companies won’t listen… we can sell our shares and put our money to better use in the Sudan. Were we to do that…the way the share market operates… other flustered investors would rush to sell. Shareholders can put pressure on these companies… whose decisions can make or break the share price of PetroChina.

This information is so new I haven’t had time to look at my own retirement funds, or the investments of the Presbyterian Church… but I will. It may be… that without knowing it…
I have money tied up… in companies with shares in PetroChina.

And China will be increasing vulnerable to pressure…
because the next years Olympics in Beijing.


Never believe the lie that there’s nothing you can do.

Actually… the vast majority of multinational corporations operating in the Sudan… are helping… to facilitate development in that country. And because of its huge debt, Sudan relies heavily on foreign investment to sustain government expenditure…so we’re not trying to scare investment out of the Sudan.

But Mammon and death work well together...
so it’s important in order that all may have life to the fullest…
we aren’t blind and deaf…to what the scramble for oil is doing to the people of Darfur…[and the middle-east for that matter] and how our own money might be complicit…As disciples of Jesus who came to restore all creation to God… you and I can be part of a concerted effort…
to end the suffering of the unclean of Darfur.