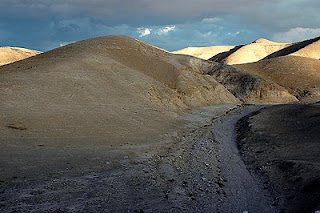 the political overtones…when Mark titles his work a "gospel".

‘The beginning of the gospel… about Jesus Christ…the Son of God.’

Matthew does this for the Jews…when he opens withthe official genealogy of King David...and Luke…writing as a Greek historian…immediately acknowledges his patron…the most excellent Theophilus.

But Mark starts with this: ‘The beginning of the gospel about Jesus Christ, the Son of God.’ What was "gospel"?

Today the word’s thoroughly soaked… with Christian religious significance…but to Mark's readers in the first century …‘Gospel’ was a fully secular term …and almost everyone associated it with Roman propaganda. You see…Roman kings…the Caesars…had this amazing public relations machine going.

Their imperial images were… all over the place…on statues and coins…even in far-flung provinces like Judaea… Stories about them would parallel ancient myths about the gods…and faithful citizens were encouraged…to speak of Caesar as… the "divine man" or as the son of the gods…and loyal Roman subjects…were meant to believe Caesar’s gospel. [pause]

So by calling his story about Jesus… a gospel…

Mark is challenging the authority of Rome by using their propaganda word…to write his "good news" about Jesus… the anointed one of God.

Today we’re trying to understand the coming of the Messiah …through the eyes and ears…of people who survived the destruction of Jerusalem and its Temple…forty years after Jesus died.

You see Mark wrote his gospel…at a time when many Jews believed…the voices of Israel’s prophets… had fallen silent forever …and to those living in that kind of darkness…Marks story would be very good news indeed.

In the voice of the prophets…Mark’s signals that anyone who thinks the story of God’s people is finished…is wrong.

This gospel is a continuation… of their salvation history.

So if they think the Romans have had the last word because the Temple was destroyed… you’ve lost the plot.

No! booms a voice from off stage, "I will send my messenger ahead of you, who will prepare your way" [pause]

These words from the prophets Malachi would have been memorised by the age of eleven…by every Jew listening. And every one of them would be reminded…of the rescue of God’s people…from slavery in Egypt and from captivity in Babylon.

‘"See, I’ll send my messenger, who’ll prepare the way before me…then suddenly the Lord you’re seeking will come to his temple; the messenger of the covenant, you desire, will come," says the LORD Almighty.’

Why has mark Mark left out Malachi's claim…that the advent of the messenger will take place "in the temple."

And suddenly we’re panting with anticipation for more of the story… Something’s about to happen. But what?

Or more importantly… where?

"a voice of one… calling in the desert, 'Prepare the way for the Lord, make straight paths for him.'

In Marks gospel God’s messenger is going to appear in the wilderness… not the Temple? There’s a new twist to the story of God’s people… because while the desert was a place of uninhabited desolation… it also represents a strong symbol of refuge…for those fleeing oppression and slavery.

‘And so John came…baptizing in the desert region… and preaching a baptism of repentance…for the forgiveness of sins.’

And do you know what the desert looks like…where the Jordon River flows? [pause]

For nine hundred years the voices of the prophets had been silent…the last prophet Elijah…had gone head to head with powerful rulers...and wore a hairy coat with a leather belt. And

‘John wore clothing made of camel's hair, with a leather belt around his waist, and ate locusts and wild honey.’

And what was the last cry before the prophetic voices fell silent? Well everyone listening to Marks gospel knew…the very last cry was Malachi's promise:

"Behold, I will send you Elijah the prophet…before the great and terrible day of the Lord comes"

‘The whole Judean countryside and all the people of Jerusalem… went out to him in the wilderness.’

You see to the Jews…Jerusalem was the centre of the universe…where all people would come… sooner or later…to worship God. But here in the gospel of Mark…the direction of God’s salvation history is reversing. People are thronging out of Jerusalem…Why?

Because the prophetic word is suddenly sprouting again…not at Zion…but in the wilderness!

The tension grows and the plot thickens…because as everyone listening knows…the religious authorities who controlled everything… from the Temple … are going to be extremely perturbed… by this wilderness revival.

Instead of observing the strict rituals of purification at the Temple… people are thronging to confess their sins and be washed clean in the Jordan River...by this new Elijah.

And Mark tells us this was his message: "After me… will come one more powerful than I am, I’m not even worth to stoop down and untie the thongs of his sandals. I merely baptize you with water, but he’s going to baptize you with the Holy Spirit." [pause]

Mark makes no bones about it…the really good news… is that in Jesus… the saviour of the world has come…A voice had called in the wilderness…and a new way was being constructed…for Jesus’ followers… the way of discipleship. [pause]

"The time has come," he said. "The kingdom of God is near. Repent and believe the good news!"

As a people baptized in Jesus name, we are now called to flesh out his good news in our own time. To work for his Shalom where the unclean are welcome to the table believers and pagans can overcome the enmity between them.

Around the world this year… churches will focus on Mark’s Gospel…and we will join them…and like Jesus first disciples… we’ll struggle…to understand the meaning of his teaching and actions… for our lives.

And the challenge for us… will be the same as for the first people listening to Mark’s gospel: will we allow this Jesus to challenge our world view? And most importantly…will we sign up… to follow him…as he bears the costs…and pays the price…for proclaiming the good news of God?