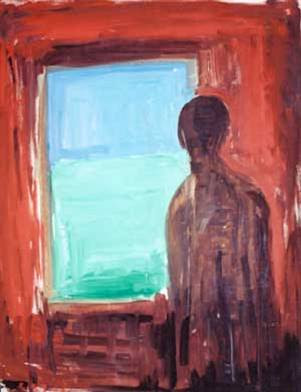 I detect an epidemic in Wanaka…an outbreak of what the apostle Paul calls ‘worldly grief’a plague of depression.

people who can’t forgive themselves.

But the epidemic of depression I’m observing… isn’t just caused by a hard economic times… some of it comes from the way our community defines sin.

where to fail… is to be worthless. Where asking for help shows weakness… where people…particularly men… feel they have to hide their despair… behind their desperation to be accepted …often until it’s way too late.

I deal with the fallout every day… inside and outside the church… and so does every social service in town. It’s front page news in the Wanaka Sun… that unemployed men are seeking financial and emotional support… in numbers so large…

that Wanaka’s Community Network… is stretched beyond its resources… and calling for help from local business. Not all of this is caused by a shrinking economy.

Of course the sense of failure people experience…is exaggerated when it costs so much more to live here than in other places. Again the Sun reports… Wanaka people pay up to 11 cents more for petrol, and 8 cents more for diesel… than people in Dunedin or Christchurch. Last week petrol prices in Wanaka reached an all-time high… and the Sun muses ironically… ‘perhaps Wanaka residents should be thankful for small mercies… after all they’re living in a slice of paradise.’

Well just below the surface of paradise is hell.

One despairing Christian man says, ‘How many days I’ve feared death, and worried about my health…because I convinced myself I wasn’t worthy…of God’s or anyone else’s forgiveness … I was taken in by the lie that I’m not worth saving or loving.’

I strongly believe as followers of Jesus… we’ve been given a precious antidote to the scourge of despair that threatens this man… an remedy…a comforting balm…that he found himself in the words of Paul you just heard.

He says ‘in the blackness of my depression Paul’s words shone like a beacon.’ And what words were so healing for him? Simply these

Slide words‘God's fellow workers… we urge you not to receive God's grace in vain.’

You see when Paul writes those words… he’s feeling very dejected…and what hurts Paul the most is… he’s being rejected criticised and condemned… by the very people he expects to love and accept him… other Christians in his own community of faith. People who are supposed to be his co-workers…in bringing God’s Shalom to the world.

It seems the Corinthian’s are refusing to give Paul the same forgiveness… the same grace… they’ve received through Jesus… and it hurts Paul like hell.

as a covenant people…sent to announce freedom to the prisoners and those living in darkness.

Paul hopes the Corinthians… will see their rejection of him…is the opposite of what they’re called to do… as God’s covenant people…sent to speaking words of forgiveness and grace…into a world captive to fear and despair.

You know it’s said… Paul’s second letter to this difficult bunch of Christians in Corinth… discloses more about his personality than any of his other letters. 2 Corinthians reveals Paul’s

human frailty…and his spiritual strength. It expresses the deep tenderness of his deep affection… and the scars of his wounded feelings. It reeks of irony and self-vindication.
And his passion for the welfare of the weak and suffering.

But most of all it expresses his concern… for the progress of the church… and the spiritual growth of her people.

All threatened by their inability to forgive.

And two thousand years later…by the innspiration of the Holy Spirit… Paul’s letter provides healing for a depressed man at the ends of the earth…a man who can’t forgive himself for his mistakes …when he reads Paul’s words this man is reminded that he is worth everything to God. And that in Christ all our sins are forgiven…

And Paul’s words are important for us as the church today… …calling on us…reminding us…convicting us…so we do not collude with an unforgiving culture… that puts so much stress on success and achievement and appearances… that people can be discarded or rejected when they fall short of our expectations. Expectations of perfection… no human can reach.

Instead of becoming a high flyer Paul… spends time in prison. Maybe he’s not the kind of role model the Corinthians are looking for. But Paul is keen as always… to point to the one…

to bring to the message of God’s grace and forgiveness… for all people.

Of course depression is organic and about brain and body chemistry…but the stress of failure…rejection… and the refusal to forgive others …makes it worse.

The depressed people I see are either like Paul… rejected because they’re not living up to the expectations of others…or like the Corinthian’s… carrying grudges and resentments… refusing to forgive those who don’t or can’t…live up to their expectations.

It’s hard to be unemployed… in a community that seems to have it all together…where most people are getting by just fine in hard times… because they’ve got plenty to fall back on.

For others it’s hard when a marriage falls apart… and all they seem to see… are happy families… shining in the sun.

And hard when you believe that you or someone you rely on… has committed the unforgivable sin of failure.

It’s hard when people seem at best indifferent… or at worst judgmental and condemning.

in response to God’s grace and forgiveness of him.
In this way he calls for

slide words‘… understanding, patience and kindness; in the Holy Spirit and in sincere love; in truthful speech and in the power of God’ What Pauls calls the ‘weapons of righteousness’.

Slide words ‘Now is the time of God's favour… now is the day of salvation.’

And because of this… as a community of Christ’s followers we now have the gift of forgiveness to pass on to the culture that surrounds us.

Because of this gift grace… we’re called to follow Jesus’ way…not the way of the world. We called to work to change the culture of our community and even our church.

as God’s children… not by their mistakes.

Inside and outside the church…our community is hurting…and into that pain and darkness we must speak the light of God’s forgiveness and grace at every turn.

‘We are therefore Christ's ambassadors, as though God…were making his appeal through us.’

Let us reflect on this as we anticipate his invitation to Christ’s table of forgiveness.